Yesterday evening my C.H.I.P. and PocketC.H.I.P. finally appeared in the mailbox, and in no time I had them up and running. The C.H.I.P. by itself is a really cool gadget, but the PocketC.H.I.P. is, to quote Steven Combs:

The geekiest gadget I have ever owned. 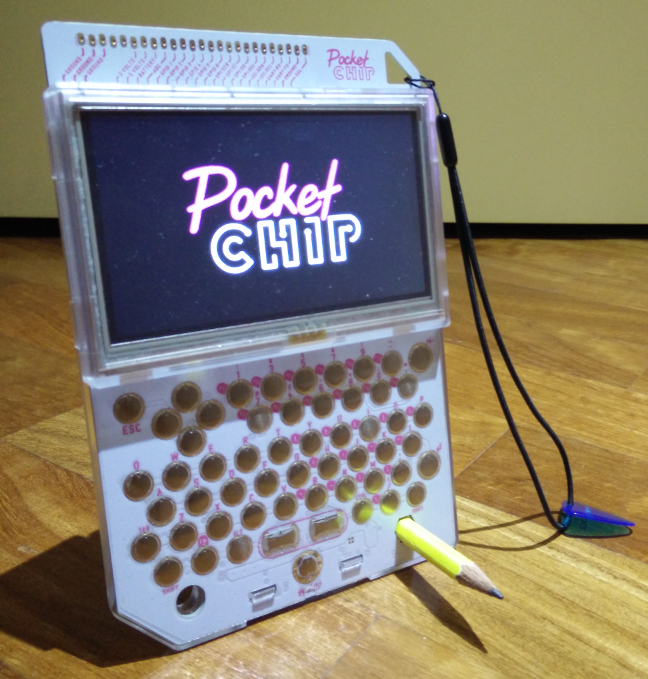 With the clear case and the exposed-electronics design, it fits perfectly in the category of gadgets that most geeks and tinkerers would fall in love with. Personally guaranteed!

I had an old Nokia plectrum lying around in a drawer - I think it belonged to my Nokia 5800 - and it seems to be a really good fit as a stylus for the PocketC.H.I.P.’s resistive touchscreen. In the picture you can also notice the actual effectiveness of the pencil-powered stand. Nice idea, NTC. &#42;tips hat&#42;

During these two days I’ve had the chance of discovering a lot of nice tweaks and mods for this device, here they follow in no particular order.

Maybe one of the first things that you’d want to set up: typing on the PocketC.H.I.P.’s keyboard surely brings some fun, but maybe it’s not comfortable enough for repetitive installation commands. Without further ado, here are the commands needed:

Those commands will install both the SSH server and client (in-field portable server debugging console, anyone?), and will disable the automatic startup of the service via systemd. This way you won’t waste precious battery, and you’ll be able to start the service just by typing sudo systemctl start ssh. If you prefer you may also setup aliases for faster access:

Install a bunch of common utilities

Pretty much self-explanatory. No? Ok, here goes a description.

If during the installation if the locales package you get stuck, see the section hereafter.

This step is mandatory if you want to use Mosh or the Powerline fonts!

Having already installed the locales package, you should have encountered its setup and having generated your chosen locales.
If not, or if you want to repeat the setup, issue:

and you will be greeted with the locales setup. Choose what configurations to generate by moving with the arrow keys and selecting/deselecting with the SPACE key (personally I use en_US.UTF-8 and my native, it_IT.UTF-8, so at least I always have the English locale available) and confirm the dialog by using the TAB key and SPACE to select. The selected locales will be generated.

Use the following commands to get everything in shape (obviously replace it_IT with your locale):

Optionally check if everything in the /etc/default/locale file looks good.
Log out and back in to apply the changes.

The touchscreen can be messy at times, especially in the upper part or in the corners. If you find this to be an annoyance, you can easily recalibrate the screen. Issue xinput_calibrator and tap the onscreen crossbows as precisely as you can.

Open the file /etc/X11/xorg.conf with your favorite editor (psst… You’ve just installed vim!) and paste that output at the end of the file.

A ZSH shell isn’t complete until you’ve installed oh-my-zsh. This should be enough to get you started:

Fix some keys in ZSH

Some keys (especially the ‘-‘ hyphen symbol) doesn’t seem to be understood correctly by the ZSH shell; the problem is that, given the default keymap for the PocketC.H.I.P., those keys are mapped as NumPad ones.
I must thank db2 for the workaround: change the lines for keycode 82 & 86 in the file ~/.Xmodmap to read:

And make sure the file is read by the shell at login:

Now the minus (-) and plus (+) keys will be recognized correctly, as they are interpreted as proper characters instead of numeric keypad keys.

Install the Powerline fonts and plugin

Powerline fonts are always a mess for me to install, I always have to patch things at random to make them work the first time. Because of this I’ll send you to the official documentation, backed by the official FAQs and Lev Lazinskiy‘s summary for further instructions.
You can do it!

Just… keep trying if they don’t seem to work.

Custom applications in the home screen

Last but not least, here’s a gallery on imgur by the user BladeMaverick that shows you how to change the default shortcuts in the device’s home screen. You can see that, for example, I opted for having Iceweasel (Firefox) instead of the “Get Help” icon. 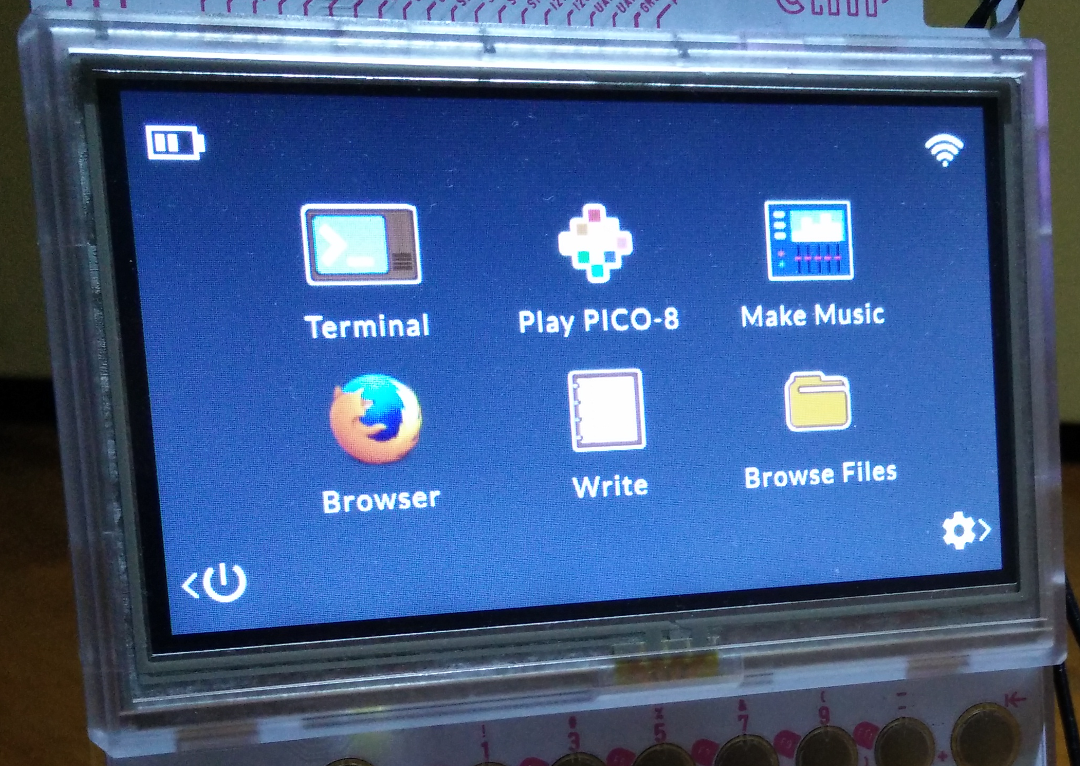 Another little aesthetic tweak that you can pull off easily is replacing the home screen’s background; just make sure that your custom image is 480x272 px and is in PNG format. Copy the image on an USB drive and insert it in the PocketC.H.I.P.’s USB port, ignoring eventual popups asking if you want to browse the drive. 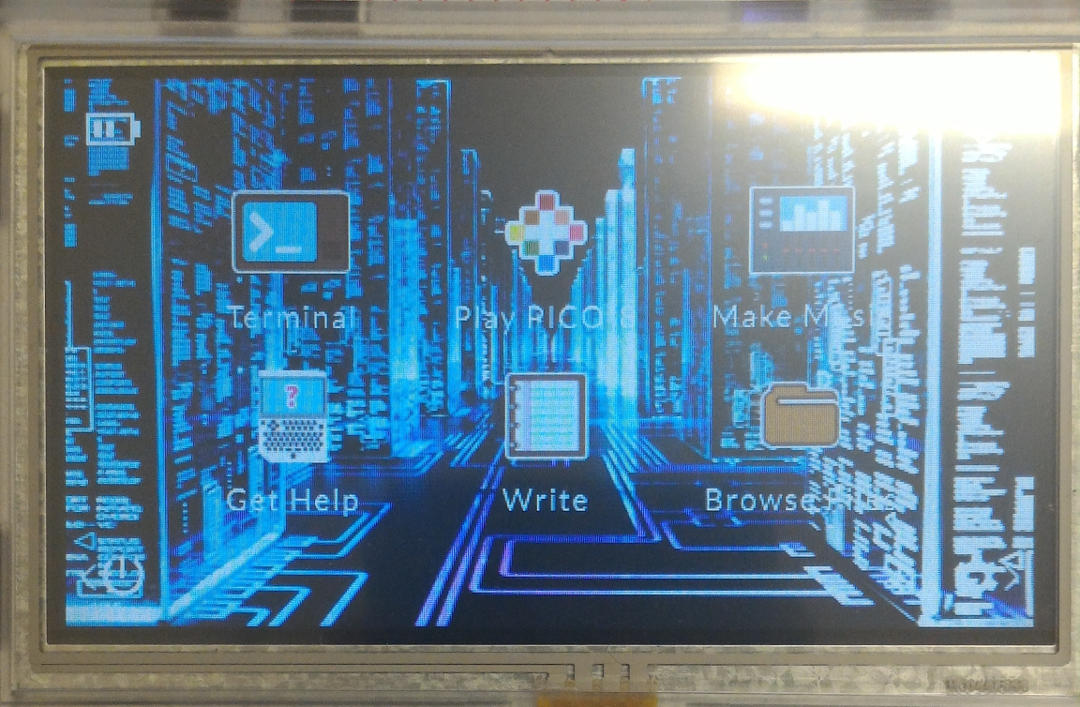 Image courtesy of user midheaventech on the NTC’s BBS.

In case something goes wrong and you end up making a mess of the system, you can either:

And that’s all I’ve got on my mind at the moment. Let me know via my social accounts if I’m missing something useful!
Have fun with your PocketC.H.I.P.